September 26, 2019
With the loyalty of a group of loyal consumers, the word â€œLi Ningâ€ has not helped the brand building. The brand recognition of the company in the eyes of the new generation of consumers is not high, and the brand is aging. In fact, the brand aging is not terrible, as long as the use of appropriate carriers and ways to once again pass the brand vitality to the target group, Li Ning can still create a new brand image, and accepted by consumers.

If you ask sportswear, who is the pride of Chinese brands, most of the answers are Li Ning. However, this company, which is proud of China, is now in trouble.

In 1988, after retiring, Li Ning did not follow the traditional path of athletes and coaches. Instead, he chose the commercial road, opened a clothing company, and registered the â€œLi-Ningâ€ brand in April 1990. In May, he announced the formal establishment of the company.

With "Li Ning" as the brand name, one of the brands that was heard that year was that everyone knew that it was not a wasteful explanation to sell sporting goods. Second, it could use the celebrity effect. Li Ning is not the spokesperson of the brand, but the brand itself, eliminating the need for many advertising costs.

Since then, Li Ning has been fluent in the market, and has maintained a sustained high growth rate since 2010 when it was listed in Hong Kong in June 2004. The perception of the Li Ning brand in the minds of consumers was once closely linked to the image of â€œthe athlete who wins glory for the countryâ€. The company also deliberately used â€œhonor and hard workâ€ to arouse the resonance of consumers. However, with the loyalty of a group of loyal consumers, the word â€œLi Ningâ€ has not helped the brand building. The companyâ€™s brand recognition in the eyes of the new generation of consumers is not high, and the brand has experienced aging. phenomenon.

In fact, the problem of brand aging and dislocation is not unique to Li Ning. For example, the Nike Jordan series launched by the sports brand once used to dominate the sports brand. Many NBA fans regard this series of basketball shoes as a collection, and limited shoes and used shoes have also become highly sought-after treasures.

However, with Jordan's retirement, the fans of the Jordanian fans also grew from spending impulse students to rational consumption workers. The brand appeal of the Jordan series has been separated from the target consumer groupâ€”adolescent fans. This is exactly the same problem that Li Ning faces. In turn, Nike launched Kobe and LeBron series shoes to respond to market changes.

Misunderstanding of the "post-90s" transition

At the beginning of the transformation, Li Ning believed that after 1990, the crowd might become the companyâ€™s main target customers and consumer entities. Therefore, â€œfashion and coolâ€ became the companyâ€™s hope to reflect the temperament. This market strategy with no logical mistakes was completely disrupted by the â€œpost-90s Li Ningâ€ that easily caused confusion. In the remodeling preparation stage, the marketing department multi-sidedly searched for suitable advertising ideas to express the new personality of the Li Ning brand. In the end, Li Ning was established. The first level of meaning was that Li Ning was established in 1990. Second, it reflected the company's desire to understand the needs of the new generation, and to pay attention to communication and change.

On July 1, 2010, Li Ning Company began to use the new brand identity and slogan. The new LOGO consists of a graphic named "Li Ning Cross Movement". The slogan replaces the original "anything is possible" with "Make The Change." After the new advertisements were aired, most of the loyal consumers believed that this was a sign that Li Ning had abandoned 70 after 80 and concentrated on â€œpleaseâ€ 90 afterwards.

Strictly speaking, if consumers think that "Li Ning advertising means that they only care about the young consumer groups" can not be regarded as misunderstanding of brand appeals, it can only be said that Li Ning Company has not done enough in propaganda, positioning and promotion. Consumers are the parents of businesses, and their will is not shifted by the will of business managers. In this regard, although Li Ning CEO Zhang Zhiyong once clarified that â€œthe concept after the 90 itself is creative rather than brand positioningâ€, in reality, the old customer groups obviously do not buy it, and after the loss of the original customer, there is no new generation of customers. Li Ning showed special recognition.

As a result, in the second quarter of the following year at the end of 2010, the order quantity of Li Ning's apparel and footwear products fell by more than 7% and 8%, respectively, and the total amount of orders dropped by about 6% year-on-year. On December 20, 2011, Li Ningâ€™s share price plummeted by 15.80%, creating the largest one-day drop since its listing in 2004. The companyâ€™s market value evaporated by nearly HK$3.5 billion in one day.

There is still hope for greater glory

According to Li Ningâ€™s 2011 earnings report, Li Ningâ€™s gross profit dropped 8.02 percentage points to 46.1%. Although gross profit still ranks among the top five sporting goods suppliers, its net profit is only 386 million yuan, which is less than the second-best net profit of the top five sports brands. Half of the 7.8 billion yuan. Aside from the costs of channel innovation, most of the above phenomena stem from confusion and dislocation of brand awareness.

In response to the dilemma caused by Li Ningâ€™s current brand cognition, experts suggested that brands should make timely changes to respond to the market and â€œpat the patchâ€ to the brand â€“ supplementing the brand's content according to the actual situation. For example, after recognizing that the classic style of the Trapeze series has become increasingly old-fashioned, Nike simply launched the retro series to launch replica shoes, creating nostalgic opportunities for Jordan fans who are currently working people and giving "old-fashioned" opportunities. "Patch became "classic," making "outdated" a "trend", and finally giving the brand its vitality.

Before 90 users of Li Ning brand, among them, the appeal of the brand still exists. The only thing Li Ning must do is find the right way to â€œget backâ€ them.

Followed by "enhanced cognition, multi-brand or solution." When we mention a brand, we often think of something. For example, the casual brand Zara represents fast fashion, and the LV represents luxury. This is â€œbrand awarenessâ€. Li Ning missed the opportunity after changing its brand and slogan, and did not pass on its own brand core idea well and then strengthened its brand awareness.

Li Ning, who is not cheap enough and lacks sufficient brand premium, seems very embarrassed at this time. Locking different consumers with multiple brands may be a solution, and Li Ning does not lack related resources. In addition to its own core LI-NING brand, the company also owns LOTTO, AIGLE, Z-DO and many other sports brands, so it is familiarizing consumers with Li Ning. At the same time as this core sports brand, Li Ning should also invest more resources in several other brands.

Finally, we can also consider strengthening the brand's effective transitivity in the fight for new generation of customers to win the market. Because the market and the environment have changed, the original targeted groups have also changed. The brand's survival depends on adapting to changes. For example, Mercedes-Benz's entry-level smart product developed in 1994 was directly targeted at BMW's mini cooper, but the Mercedes-Benz's light, environmentally friendly, and fashionable concept has not been ideal for sales until 2010, not to mention the brand's new concept. Now. The main reason is that the car looks too small, in order to smart to the market, so that everyone understands the Mercedes-Benz concept, then Mercedes-Benz found the NBA favorite star Bryant Bryant endorsement smart. People with a height of 2 meters can get into smart, Mercedes-Benz's new concept will be delivered instantly and consumers will accept this product.

From this we can see that the proper carriers and approaches are very important for the brand's vitality to be passed on to the target group again. The simplest and most suitable carrier is the product itself. To adapt to the market and meet the consumer's requirements, the best product is the best carrier and channel.

Patio furniture cover protects your garden furniture from all the elements all year round, whether it be rain, snow, frost, UV rays, dust, dirt or bird dropping etc. It is made from coated polyester fabric.


You can choose any color and any size, the general weight is 350GSM. 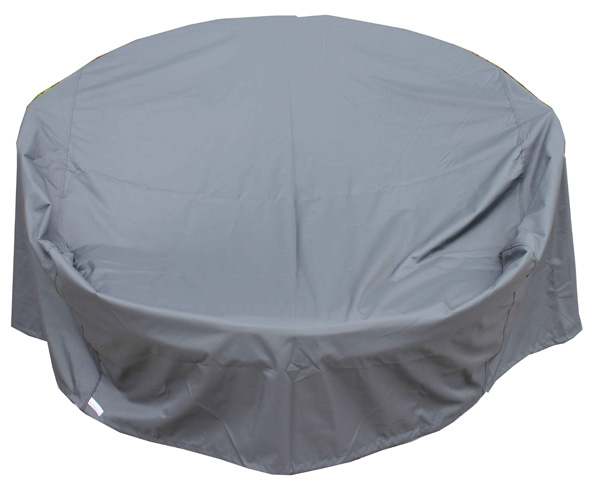