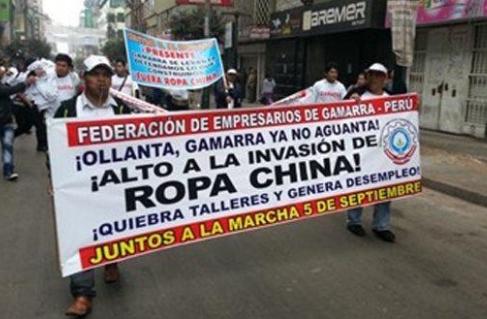 As early as 2004, there were incidents where local people burned leather shoes in Wenzhou, China. Now, the scene of boycotting Chinese goods has been repeated again in Peru. Peruvian textile companies and merchants have launched mass marching toward the streets and demanded that the government increase the import tariffs on Chinese textiles, because in this way, Chinese textiles and Peruvian textiles can compete at the same price level.

According to a recent report by Argentinaâ€™s â€œIsraeliâ€, yesterday, Peruvian textile merchants closed their doors and rushed to the streets to â€œunfairâ€ competition brought about by cheap Chinese clothing. The ranks of these merchants marched in front of the presidentâ€™s office.

Arturo Zavala, one of the representatives of textiles, said that as China's cheap clothes have been pouring in with rapid momentum, textile sales in Peru's local shopping malls have fallen significantly. He said: "Chinese clothing has occupied 80% of the market."

He proposed that the government should levy a 10% tariff on imported garments and that the price per kilogram should be raised to more than 15 US dollars. He said that in this case, the prices of imported clothing and local clothing can be equal.

Arturo Zavala also called for a dialogue with the Ministry of Labor: â€œThe overcapacity of our factory now exceeds 40%, resulting in the loss of more than 9,000 workers.â€

DiÃ³genes Alva, a business person who participated in the parade, said: â€œWe are very angry about this situation. We did not ask the government for money. We just required equal legal treatment and a fair competitive environment.â€

The Textile Entrepreneurs Association, JosÃ© Luis Mu oz, stated: "In 2013, we lost $70 million. In recent years, Peruvian farmers have stopped planting 200,000 hectares of cotton due to the influx of Chinese clothing."

Hugo.com has learned that in the past decade, the volume of trade and investment between China and Latin America has grown rapidly, of which China-Latin America trade has exceeded 250 billion U.S. dollars. A report disclosed that since 2005, China has provided more than US$86 billion to Latin American countries.

Chinaâ€™s trade and investment have contributed to economic growth in Latin America, while Latin America has acquired sources other than the United States and the European Union.

With extremely close economic, trade, and investment relations, the Latin American government has adopted more liberal controls and preferential policies on Chinese imports, but the influx of Chinese products has caused dissatisfaction among local industry professionals. Over the years, China has become a veritable "world factory." Although raw material and wage levels have risen in recent years, the prices of Chinese goods in the international market are still relatively low, and therefore have a good price competitiveness.

The boycott of the textile industry in Peru reminds us of the boycott of Chinese goods in France and Spain in the early years. This should arouse the alertness of Chinese exporters. We should take early preventive measures in international trade to avoid Necessary loss.

Why do these boycotts happen? In addition to the fact that domestic goods are being squeezed out due to cheap Chinese goods, there is also an important reason for the quality of Chinese products. For example, the dumplings exported to Japan in previous years were poisoned by consumers, and the whole country set off. In addition, Chinaâ€™s furniture exported to France was found to contain dimethylformamide, and France announced that it prohibited the import of some Chinese furniture; products exported to the United States from aquatic products to toys and toothpaste have been discovered. The inconsistency with the trademark, insecurity, or the presence of dangerous contaminants are contaminating the "Made in China" brand and have caused a boycott in the United States.

Looking at various factors, China's goods are facing boycott. In addition to cheap prices, there are also quality issues. Chinese manufacturers should focus on long-term interests, increase efforts to improve product quality, and shape the brand image. In this way, Chinaâ€™s exports will only go farther.

Knit Jackets, jacket but in knit fabric, so it is very soft and it has good stretch , comfortable wearing. The fabric can be light or heavy weight . Light fabric for spring/summer, and heavy fabric for winter, warm body.  The fabric composition can be polyester or cotton, or other fibers , some fabric also have special function like waterproof.We can offer our styles/designs or customer can offer their own product for us to copy.